Beta-catenin is a structural protein that forms part of the extended cadherin complex and also functions as a signaling molecule in the Wnt pathway. It is an 88 kDa protein that is mostly composed of "armadillo repeat domain" copies. Each domain is approximately 42 amino acids long and contains two alpha helices separated by a hairpin. Beta-catenin contains 12 copies of this domain, forming an alpha helix "supersolenoid" structure that contains a large, positively-charged groove that is well-adapted for protein-protein binding. This binding is regulated via phosphorylation; for instance, phosphorylation at the S552 residue by AKT promotes binding to transcription factors.

Adherens junctions often appear as broad bands that completely encircle epithelial cells. In this form, they are called belt desmosomes and are commonly seen in tissues that closely regulate the flow of nutrient and waste molecules, such as the epithelial cells lining the small intestine. Beta-catenin forms an important part of these junctions, where it comprises part of the protein complex between E-cadherin and the actin cytoskeleton. The cell's cadherin proteins bind to cadherins in adjascent cells. Thus, beta-catenin is a crucial component in a juncture that physically links the cytoskeletons of neighboring cells, allowing for the close regulation of molecular transport across a thin tissue layer. 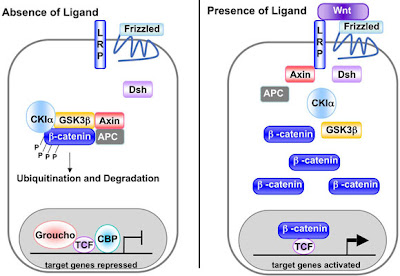 Beta-catenin also acts as a signaling molecule within the Wnt signaling pathway. This pathway is especially important during embryogenesis, where it is responsible for axial development and the development of the dorsal neural tube. Dysregulation of this pathway is associated with exposure to carcinogens. Through this pathway, beta-catenin acts as a transcription factor. Outside of the adherens junction, beta-catenin binds to a "destruction complex" that results in its ubiquitination and rapid degradation. Upon activation of the Wnt pathway, this complex is inhibited and beta-catenin translocates to the nucleus, where it binds with TCF/LEF family transcription factors to alter gene expression. Through this pathway, beta-catenin has the potential to substantially alter cellular function.

The visualization of this protein using a beta-catenin antibody is useful for both diagnostic and research purposes. Due to its role as a gene regulator, beta-catenin is considered to be an oncogene. It binds to the APC protein, a regulator of cell cycle. Mutations and dysregulations of the beta-catenin/APC interaction are often seen in individuals susceptible to colorectal and ovarian cancers. Its transcriptional activity is controlled by phosphorylation at S552 by AKT. This phosphorylation causes the release of beta-catenin from the adherens complex and leads to a buildup of the protein in both the cytosol and the nucleus. Beta-catenin is most commonly visualized via immunofluorescence using a beta-catenin antibody and an appropriate secondary antibody, though DAB staining is also common for diagnostic purposes.

In cells without Wnt pathway activity, beta-catenin is seen largely at the cell periphery, where it expresses at the adherens junction but not the interior of the cell, where it rapidly undergoes proteolysis. Activation of the Wnt pathway or pharmacological intervention, such as via GSK3 inhibition, results in the rapid dispersal of beta-catenin into the cytosol, with especially high concentrations seen in the nucleus if AKT is also present. However, if the S33 and S37 residues are phosphorylated, as occurs in the destruction complex, the protein is degraded and little expression is seen outside of whatever remains at the adherens. Visualization using a beta-catenin antibody can therefore determine the functional and phosphorylation states of the protein. This can be further confirmed via antibodies that are specific to the various beta-catenin phosphorylation states.