The CD44 antigen is a glycoprotein that is found on the surface of many cell types, including resting T cells, and is involved in cell-cell interactions and cell adhesion. CD44 acts as a receptor for hyaluronic acid and plays an important role in cell migration, including the recruitment of effector T cells and other leukocytes to infection sites. CD44 also participates in lymphocyte activation, recirculation and homing, as well as hematopoiesis and tumor metastasis. The function of CD44 is controlled by posttranslational modifications including proteolytic cleavage, N- and O-glycosylation and phosphorylation. 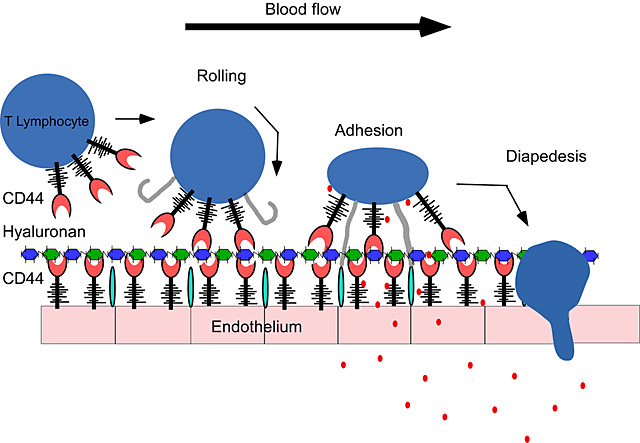 The function of CD44 on T cells

Due to an increase in its expression following the activation of B-cells and T-cells, CD44 can serve as a valuable marker for memory cells. Furthermore, the upregulation of CD44 expression is sustained on effector cells and memory cells after the immune response has subsided, so CD44 expression can also be used as an indicator of prior exposure to an antigen. However, little is currently known about its function of T cells. Recent studies have suggested that the CD44 signaling pathway may be involved in ensuring proper T cell effector responses by providing contextual signals at various anatomical sites. CD44 ligation may also promote T cell survival through the augmentation of T cell activation in response to an antigen. Studies also suggest that CD44 may contribute to both the regulation of the contraction phase of an immune response and the maintenance of immune tolerance. Furthermore, CD44 may play a role in ensuring the functional fitness of memory T cells once the memory stage has been established.

The therapeutic potential of CD44 inhibitors

In addition to its function on T cells, current research is also focusing on CD44 as a potential therapeutic target for controlling inflammation. Early studies have shown that the blocking of CD44 results in a reduction in skin contact sensitivity responses due to a decrease in lymphocyte and leukocyte infiltration. Other studies have shown that pulmonary injury and allergic responses are reduced following treatment with CD44 antibodies. Additionally, interfering with CD44 function has shown therapeutic potential for the treatment of arthritis, multiple sclerosis, colitis and type 1 diabetes. However, a better understanding of the multiple, distinct roles of CD44 in various cell types will be required to fully realize the therapeutic potential of CD44 inhibitors.