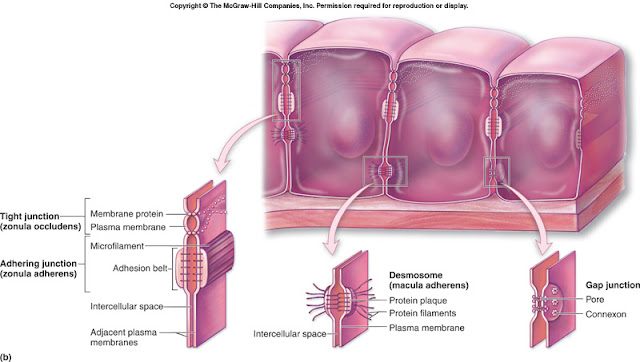 Adherens junctions, also referred to as zonula adherens or intermediate junctions, are defined as cell junctions in which the cytoplasmic face is linked to the actin cytoskeleton. They can appear as either bands encircling the cell or spots of attachment to the extracellular matrix. Adherens junctions are composed primarily of cadherins, p120, alpha catenin and beta catenin.

Gap junctions are specialized intercellular connections that are found between multiple types of cells. They are composed of two connexons that connect across the intracellular space. These junctions directly connect the cytoplasm of two cells and allow various molecules and ions to pass freely for direct electrical communication between cells.

Tight junctions, which are also referred to as zonula occludens, are formed when the membranes of closely associated areas of two cells join together to form a virtually impermeable barrier to fluid. One of the functions of tight junctions involves the preservation of transcellular transport. Tight junctions maintain the polarity of cells by preventing the lateral diffusion of integral membrane proteins between the apical and lateral/basal surfaces. This allows the specialized functions of each surface to be preserved. Tight junctions are also involved in the prevention of the passage of molecules and ions through the spaces between cells.

The study of junction assembly and remodeling on the molecular level is a rapidly growing area of research. Studies that address the fundamental properties of junction dynamics will most likely further reveal the complexity of these specialized organelles.