Vimentin is an invaluable diagnostic protein with an important functional role

Vimentin is a type III intermediate filament (IF) protein present in many eumetazoan cell types of mesodermic origin, such as the mesenchyme and fibroblasts, as well as some ectodermal cells, including neural stem cells and some cancers. Vimentin is a 53.5 kDa protein that contains a long central α-helix that dimerizes with another vimentin molecule to form a coiled coil. The α-helix and the resultant coils are remarkably stable due to the regular spacing of charged and hydrophobic residues along the helix. The C- and N- terminals of the molecule contain globular domains capable of interacting with organelles, actin and tubulin filaments, cytoplasmic proteins, and other vimentin dimers.

In cells that express vimentin, it forms an integral part of the cytoskeleton. Unlike actin and tubulin filaments, which are relatively rigid in structure due to their regulated assembly into highly structured polymers, vimentin has a malleable structure due to its aggregation via terminal domain interactions. Consequently, cells with high vimentin expression, such as mesenchymal cells, tend to be elastic and structurally robust but lose this elasticity when the protein is knocked out or functionally inactivated. Vimentin anchors membrane-bound organelles such as the mitochondria into relatively stable positions within the cell and is responsible for facilitating transport toward these organelles.

The mechanisms and importance of vimentin-driven and -facilitated transport is a subject of ongoing research. During mitosis, vimentin filaments are disassembled upon S55 phosphorylation to allow for cytokinesis. The dissociation of vimentin filaments via phosphorylation in nondividing cells results in a cytoskeletal contraction (via the myosin light chain) that directs LDL droplets to the mitochondria where cholesterol is exposed to its side-chain cleavage enzyme, thus increasing steroid biosynthesis. This has implications for both endocrinology, where the synthesis of steroid hormones is tightly regulated by the endocrine cells, and cancer biology, where some tumor types secrete excessive levels of these hormones.

Immunohistochemical staining of vimentin is useful for a number of purposes; given that it is cell-type specific, especially outside of mesodermal tissues and that the intracellular expression profile varies somewhat based upon the functional role of vimentin in a given cell. Immunohistochemical assay for vitamin is useful for diagnosing cancer types where the protein is overexpressed, such as sarcomas, and some melanomas and lymphomas. This is especially true of malignant epithelial cells that are becoming undifferentiated, which often express high levels of the typically mesodermal protein.

In addition to the typical extension and dissociation of vimentin filaments, cells that are rapidly expressing vimentin form "fountains" where the vimentin filaments rapidly spread out toward the cell membrane and then spread out and circle back upon approach. Such assessments of vimentin mechanics generally use a GFP-tagged vimentin protein in a transgenic system such that the protein can be visualized in vivo. However, pathology and diagnostics work generally utilizes fluorescence or DAB immunohistochemistry in fixed tissue using an anti-vimentin antibody. 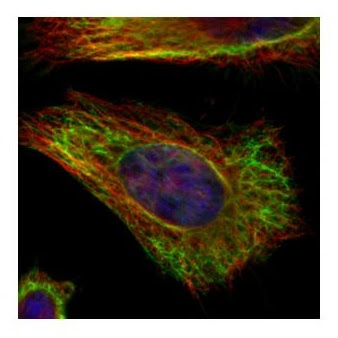 A quality anti-vimentin antibody can also be used as a neural stem cell marker. While the classical BrdU/NeuN double stain identifies recently-formed neurons, it cannot identify neural stem cells that are not actively dividing. This gives vimentin an important role in the functional assessment of neural stem cells. For instance, a vimentin stain coupled with BrdU can identify the fraction of neural stem cells that are proliferating during an experimental treatment or time window. A number of treatments and conditions are known to alter the rate of neurogenesis, including major depression and cortisol imbalance (such as in Cushing's Syndrome), where hippocampal neurogenesis is substantially inhibited, and low-level radiation exposure, which temporarily halts neural stem cell division.