Stem cells are a hot topic right now, for both ethical and technological reasons. However, many people do not really understand what stems cells are and how they can be used. There are a variety of sources of stem cells, as well as many different potential and practical uses that they are associated with. 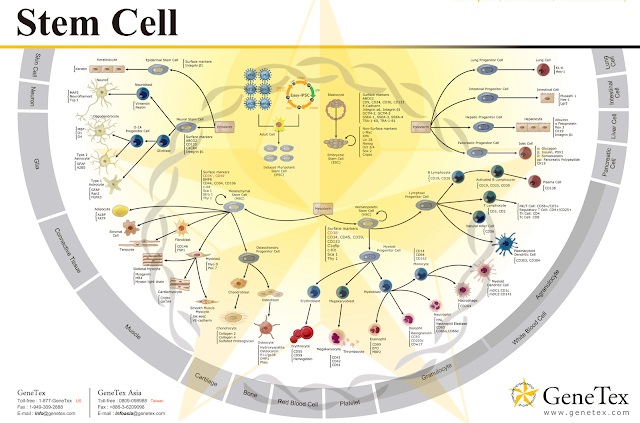 In any organism, the cells that make up the adult animal are differentiated. This means that they perform functions specific to where they are in the body. For example, a skin cell does not perform the same tasks as a brain cell. Typically, these cells cannot change into another type of cell, and can only divide to create more cells of the same type.

Because stem cells can divide into many different types of cells, they could potentially be used to replace faulty cells in the body. Scientists know how to induce stem cells to turn into certain other types of cells, but they are still working on how to best treat diseases with them. There are a great number of issues surrounding the problem, including ethical and practical ones.

Embryonic stem cells were the first to be discovered and isolated. In 1981, these cells were isolated from mouse embryos and were found to be able to turn into any tissue in the body. Adult stem cells were found later, during the 1990s. Adult stem cells are not capable of becoming any tissue in the body, but can become different types of tissue associated with a certain part of the body, such as a blood or brain cell.
Embryonic stem cells markers: SSEA5 antibody, SOX2 antibody [N1C3], KLF4 antibody, LIN28 antibody, NANOG antibody [N3C3], OCT3/4 antibody [N1C1], Alkaline Phosphatase (Tissue Non-Specific) antibody, E-cadherin antibody

It has been known since the 1960s that bone marrow in adults contains stem cells. These cells can be used in transplants because they will differentiate into all of the different but necessary types of cells in the blood. However, it was not known that stem cells like these existed in other parts of the body.

During the 1990s and beyond, scientists found more of these cells in other areas of the body, such as the brain. They are an active area of investigation, because propagating a person's own stem cells could provide a replacement for faulty heart valves or other tissues. However, adult stem cells are relatively rare and limited in growth potential once removed from the body.

In 2006, science made another discovery, which was that some of these adult stem cells could be reprogrammed into an embryo-like state referred to as pluripotent. This means that the cells again had the potential to become any tissue in the body, not just a range of limited tissues.

One focus of stem cell research is called cell-based therapy. This involves using stem cells, either embryonic or adult, to create new tissue that can replace the old damaged or diseased tissue. It is mostly still in the experimental phase, with certain exceptions such as bone marrow transplants.

Laboratory studies have suggested that under certain conditions, stem cells can regenerate tissue in animals. Rats with damaged hearts that were injected with stem cells gained improved heart function. However, it is not yet known how the stem cells increased heart function, which is crucial to learning how to use them in humans.

Another area of research involves laboratory cell lines. Creating cells with the properties of the various tissues in the human body would allow the screening of drugs and other compounds to see what their effect is. This is already done with cancer cells, which are cultured in the laboratory and used to test whether anti-tumor drugs are effective.

Stem cell markers are proteins on the surface of the cell that react with or bind to other proteins. Each type of cell has a unique array of markers on its surface. Scientists can locate and identify specific types of stem cells by introducing agents that bind to these specific markers, such as fluorescent compounds.

Markers are an important tool for finding adult stem cells, which may make up less than 1/100,000th of cell populations. Many stem cell types have been characterized by the presence or absence of certain markers. Unfortunately, no single marker or set of markers that will identify all pluripotent cells has been found.